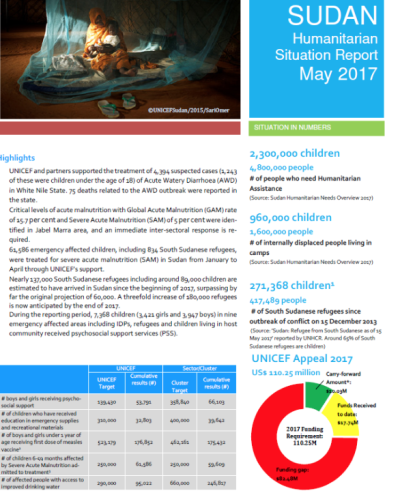 • UNICEF and partners supported the treatment of 4,394 suspected cases (1,243 of these were children under the age of 18) of Acute Watery Diarrhoea (AWD) in White Nile State. 75 deaths related to the AWD outbreak were reported in the state.

• 61,586 emergency affected children, including 834 South Sudanese refugees, were treated for severe acute malnutrition (SAM) in Sudan from January to April through UNICEF’s support.

• Nearly 137,000 South Sudanese refugees including around 89,000 children are estimated to have arrived in Sudan since the beginning of 2017, surpassing by far the original projection of 60,000. A threefold increase of 180,000 refugees is now anticipated by the end of 2017.