In his report, the UN Secretary-General states that the Sudan Government security forces took all necessary steps in its Action Plan pertaining to ending and preventing the recruitment and use of children. This is a result of the measures taken in the Action Plan to Protect Children from Violations in Armed Conflict jointly with the United Nations since its signature on 27 March 2016.

“The declaration by the UN Secretary-General is a clear result of the Government’s determination towards the protection of children who are affected by conflict in the country. The United Nations takes this opportunity to reiterate its full support to the Government of Sudan in promoting and protecting children’s rights in Sudan”, says Mr. Matthew Hollingworth, the UN Resident and Humanitarian Coordinator a.i. “UNAMID was proud to sign the Action Plan and now to see it fulfilled today,” adds Kingsley Mamabolo, the Joint Special Representative of UNAMID. He praised the Government of Sudan’s cooperation with UNAMID on issues related to children and armed conflict in the Darfur region.

As Co-Chairs of the Sudan Country Task Force on Monitoring and Reporting (CTFMR), the Resident Coordinator, UNAMID, and UNICEF have supported implementation. “The completion of the Action Plan is a breakthrough achievement for the Government of Sudan in building protection systems for prevention of the recruitment and use of children that would not have been possible without full cooperation and partnership,” says Abdullah Fadil, UNICEF Sudan Representative.

Implementation was steered by the High-Level Committee on the Action Plan chaired by the State Minister for Foreign Affairs, and the Technical Committee chaired by the Secretary-General for the National Council for Child Welfare, as well as state committees chaired by Walis (Governors) and State Councils for Child Welfare. “In an unprecedented manner, the UN was granted access for monitoring and verification to military commanders, barracks, administrations, training centers, and recruitment points in conflict-affected states over 12 joint missions,” adds the UNICEF Representative. In 2017, 714 members of the Sudan Armed Forces, 202 Police, 130 National Intelligence and Security Service, and 172 Popular Defense Forces were trained on child rights, and, in 2018, 60 members of the Rapid Support Forces.

The Action Plan neared completion at the time of the visit of the UN SG’s Special Representative for CAAC, Virginia Gamba, to Sudan on 1 March 2018 with some key steps remaining. This included two major achievements in the institutional development of the protection system of children. First, the establishment of a complaint mechanism for communities to report cases of child recruitment on 26 April. Second, the adoption of standard operating procedures on release and handover of children formerly associated with armed groups on 28 April. “The Action Plan has crucially allowed for the release and reintegration of 44 children formerly with armed groups and in military detention,” Fadil further noted. Released children are supported through community-based reintegration programs, including family reunification, psychosocial support and access to education[1].

Completion of the Action Plan is notwithstanding the need to continued work to end all violations against children by all armed actors, including killing and maiming, sexual violence, and attacks on schools, as noted in the UN Secretary-General’s report. “While we celebrate this important milestone, UNICEF encourages Sudan to build on this framework by strengthening prevention and addressing negative social norms,” Fadil concludes. The UN in Sudan will support the Government to institutionalize the gains of the Action Plan by launching a national communications campaign to prevent violations against children, implementing the complaint mechanism, and training of forces on child rights. This is in line with the SG’s Special Representative’s call “to transform [the] Action Plan into a National Plan for prevention of violence against children.”[2] 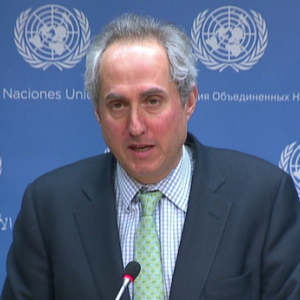 Spokesman for the UN Secretary-General
dujarric@un.org